The West Hotel was known to be a destination of luxury in the late nineteenth and early twentieth century. It was built with funds of Charles W. West, and subsequently, he gave the new world-class hotel to his nephew and then manager of the Nicollet House, John T. West. Charles West spent an exorbitant amount of money building the hotel with ornate detail and making it particularly extravagant for visitors. As a result, the building became well known, and was the perfect addition to the then new state’s aspirations for success. The opening night banquet and celebration in November of 1884 was highly anticipated, although sadly approximately two months before the evening, Charles West died.

This large urn stood in the West Hotel’s lobby before coming to Hennepin HIstory Museum.

Even after the death of Charles West, the building of the hotel continued and opening night was still a major success. It was a night of recognition and appreciation to the two people who made the building possible, Charles and John West. Around 500 guests attended the ten dollar a plate banquet, and many famous Minnesota leaders were among them. This large silver ceremonial urn, believed to be by Tiffany & Co. Silver,  was given to John West who accepted it in honor of Charles West. The 5,000 dollar urn was made in New York specifically for Charles West as a thank you gift from the city of Minneapolis.

Following the opening night banquet, the hotel started off with success as many wanted to experience the extravagance of the West Hotel. In fact, the West Hotel hosted the 1892 Republican National Convention, and famous people such as Winston Churchill and Mark Twain were among the hotel’s visitors. However, after the hotel caught fire in 1910 and more competitors popped up in the area, the hotel lost its luster. In 1940, its owners  decided to raze the building to make way for a parking lot. 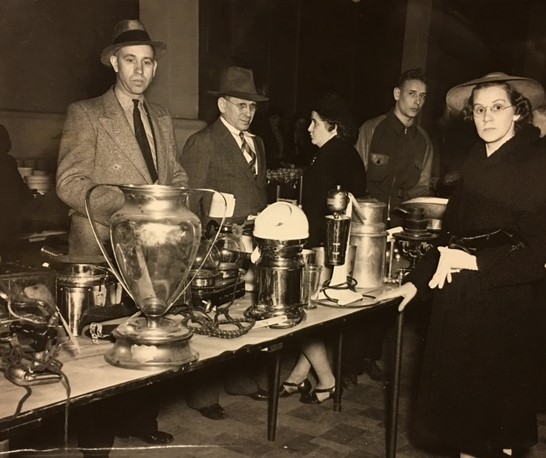 Auctioning West Hotel items before the building was razed.

The West Hotel ceremonial urn features an image of Charles W. West and the West Hotel as it looked in 1884. The cup sat in the West Hotel for guests to view. It was donated to Hennepin History Museum by Nathaniel DeLue Jr., who acquired the urn after the hotel closed.

Lindsay Simmons is an art history and museum studies graduate student at the University of St. Thomas in St. Paul. She is currently an intern at Hennepin History Museum working on the museum inventory project. She spent the summer assisting in rehousing and cataloging some of the museum’s 15,000 objects. This urn was one of the first objects she cataloged for the collection. She enjoyed researching this object as it is an important piece in HHM’s collection, and as a resident of Minneapolis, she finds learning about the history of the city fascinating.