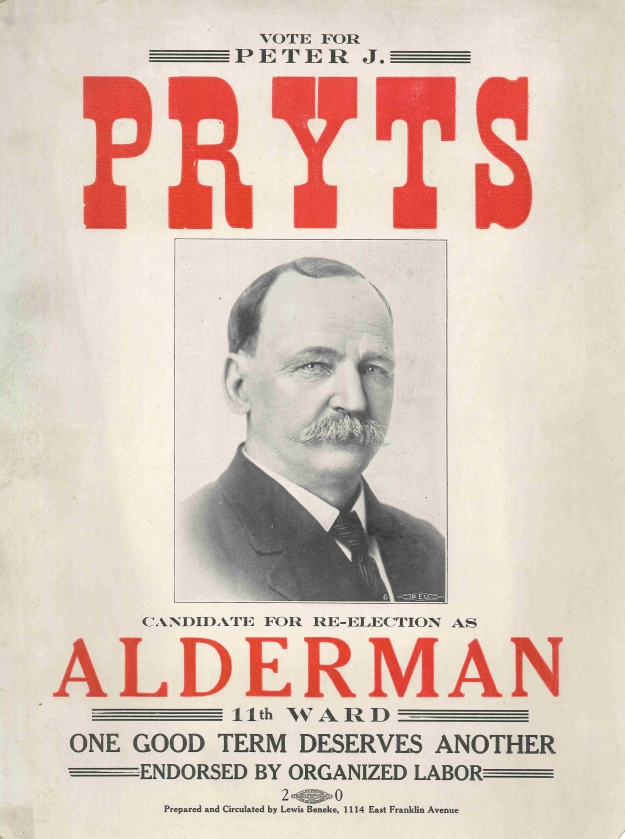 With the primary elections for Minnesota only a few weeks away (August 14th), it is important to highlight Hennepin History Museum’s pieces of political history. This election poster promotes Peter J. Pryts’ 1923 re-election as Alderman in the Minneapolis’ 11th ward. A carpenter by trade, Pryts had grown up on a farm in Fillmore county Minnesota, following his immigration from Norway in 1866.

Pryts promoted himself as a progressive candidate and was initially elected based on this platform. In 1923, he was endorsed by the nonpartisan league, organized labor and the socialist party. He ran in favor of “city beautification and improvement for the benefit of the people of Minneapolis.”  Many of these progressive groups and populist movements supported government infrastructure development and improvement. Pryts and other progressive politicians pushed for improvements like paved streets, curbs and water mains. While modern Minneapolis residents may take these for granted, the advancements supported by the populist movement are what made Minneapolis a modern city in the 1920’s.

After his defeat in 1925, Pryts worked for the city as the bridge watchman for the Franklin Avenue and Lake Street bridges. The position was eventually eliminated in an effort to cut city payroll. Peter Pryts died on November 11, 1937 at the age of 77.

This poster and other Hennepin County elections artifacts can be found in the Hennepin History Museum Archives.