The Heffelfinger family boasts military and football achievements galore, but if you were a young woman living in Minneapolis during the second half of the nineteenth century, chances were you knew the Heffelfinger name from your weekend shopping trips or the sole of your shoe.

Brothers Christopher and Charles Heffelfinger were born in Cumberland County, Pennsylvania in 1835 and 1850, respectively. Christopher first came to Minneapolis in 1857 where he occupied himself through various pursuits until the outbreak of the Civil War. He was one of the first to enlist and joined he First Minnesota Infantry. Christopher nearly lost his life in the battle of Gettysburg, but was saved when a book he was carrying in his breast pocket cushioned the blow of a bullet. After the war, he returned to Minneapolis, accompanied by his new wife Mary Ellen. Tired of military life, Christopher entered into the shoe business with a man named Walker in 1866. Christopher’s brother Charles, having just moved to Minneapolis that year, joined the pair and together they sold their shoes in the bustling Bridge Square neighborhood at the southern end of the Hennepin Avenue Bridge.

In the spring of 1870, Christopher bought out Walker’s shares in Walker and Heffelfinger’s and continued to run the business with Charles in the same location. Three years later, however, Christopher left his younger brother to found the North Star Boot and Shoe Company. Left on his own, Charles partnered up with his former employee Joseph F. Hause and the two ran the store together until 1875 under the name Heffelfinger & Hause’s.

Throughout the next decade, Christopher’s shoe empire flourished, entire pages of the Minneapolis Tribune dedicated to its growth and successes as it hopped from one building to another one, far larger. Slightly in the shadow of his older brother’s triumphs, Charles sold shoes independently, calling his store C. A. Heffelfinger’s. 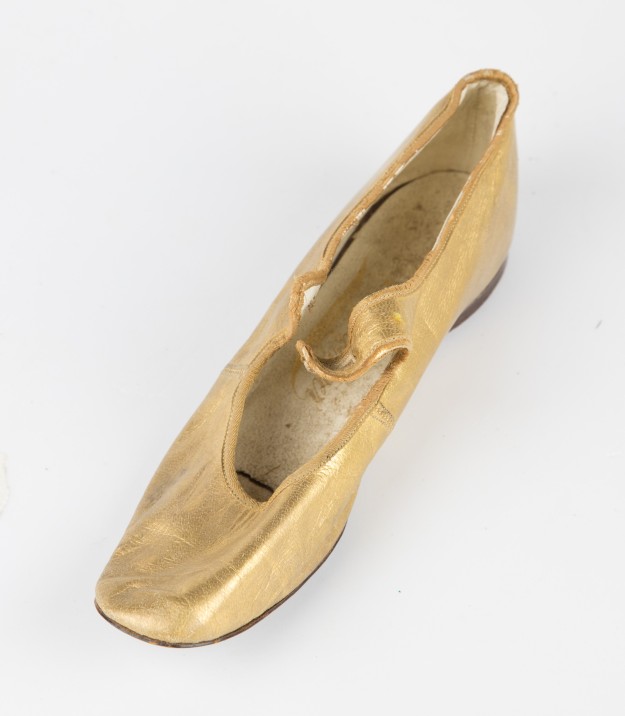 In 1896, Charles, then a man of forty-six, hoped to give his business a facelift. He released his remodeling plans to the Minneapolis Tribune in February and the newspaper predicted that C. A. Heffelfinger’s would become “by far the most imposing and attractive show store in the Northwest.” As part of the remodeling process, Charles enlisted the partnership of his nephews William and Frank Heffelfinger. William, nicknamed “Pudge”, is known today as the first ever professional American football player.

The shoe empire created by the Heffelfinger brothers no longer exists—the spaces dominated by the massive stores now house condo buildings and the retail industry operates primarily online. These pairs of shoes located in the Hennepin History Museum collection conjure up nostalgic images of an early Minneapolis, and remind the historian of the days when “If in the flames of Hell you’d linger, buy your shoes from Heffelfinger” constituted an appropriate negative ad campaign.

Carson Backhus is a Collections Intern at the Hennepin History Museum. She has a bachelor’s degree in history and French from Grinnell College in Iowa. Her primary historical interests are in the French Revolution and sensory history.