Did you know that Hennepin History Museum is home to an extensive historic cookbook collection? The collection includes dozens of community cookbooks created by local churches, hospitals, schools, businesses, and other organizations, as well as cookbooks  by local authors or featuring local restaurants and advertising cookbooks or recipe booklets distributed by Hennepin County companies. 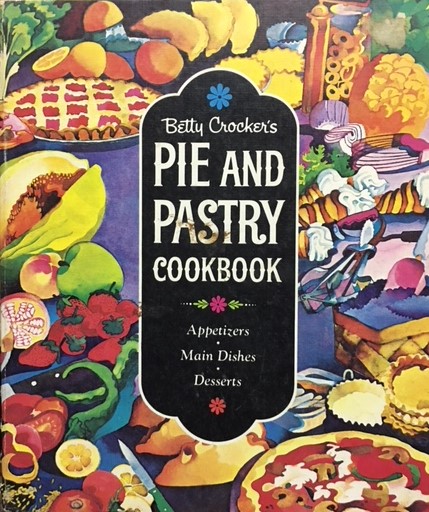 Included in this cookbook collection is an extensive run of General Mills and Pillsbury cookbooks, including this first edition of Betty Crocker’s Pie and Pastry Cookbook. Cookbooks like this had a national appeal; you were as likely to find it on the shelf of a resident in Texas, New York, or Montana as you were Minneapolis, Minnetrista, or Maple Grove. But residents here, unlike those of those farther-flung locations, were able to call General Mills their hometown company.

Cookbooks like this – in addition to being a font of inspiration for your next dinner party – provide insights into daily life and changing American culture. Betty Crocker’s Pie and Pastry Cookbook was first published in 1968, joining 11 other cookbooks on the General Mills cookbook shelf. The company had observed many changes since the first Betty Crocker cookbook was published in 1950. According to an interview in the 1968 Minneapolis Journal, some of these highlights included:

Betty Crocker’s Pie & Pastry Cookbook retailed for $2.95. Contents included holiday staples such as the “Old Fashioned Pumpkin Pie” shown above, as well as a cheeseburger pie, grasshopper pie, jam tartlets, and a wide variety of other sweet and savory pies and pastries. The recipes in this and other Betty Crocker cookbooks were tested and developed in the General Mills company kitchens in Golden Valley.

What about you? Do you have Betty Crocker memories? Favorite pie recipes, past or present? Please share your memories in the comment section below.

Did you know that we depend on individuals like you to fund our operations, including maintaining our library and archives? Please consider making a gift today to support local history. Every dollar makes a difference. Click here to support Hennepin History Museum