This desk was made by students in the industrial arts class at South High School for the 1892 Republican National Convention. The chairman of the Republican Party, James S. Clarkson, sat behind it during the first and only major political convention ever held in Minneapolis.

The year was 1892. It was a wild and exciting time. Benjamin Harrison was the sitting president, running in the primary against three other candidates, including William McKinley, who would later be elected president in 1897. Though Harrison won the primary, his results were underwhelming and he would go on to lose the national election to Grover Cleveland, old Tippecanoe, who still stands as the only president to serve two non-consecutive terms.

The Republican National Convention in Minneapolis, drew over 35,000 people and was the first convention where women were allowed to be delegates, but our citizens were more jubilant about the opportunity to show the politicians and visitors that Minneapolis, the “Prairie Queen”, was no frontier town full of barbarians. People advertised in the newspapers about fabulous deals on flags and banners to decorate the city, and there was even a contest where one could guess the nominee and the date and time of the vote for a chance to win $87.50 in gold.

The Convention took place in the newly remodeled Exposition Building. The building was designed to “appear artistic but not gaudy, patriotic and grand but not overdone, and the whole design was made subservient to the vision of the visitor sitting in the farthest corner of the gallery.”

The desk once had three silver plaques commemorating how and when it was used, but only two remain today. The smaller plaques indicate that it was used again in the 1896 convention, held in St. Louis, and the 1900 convention in Philadelphia.

Evan Walker recently completed a summer internship at HHM. He enjoys walks on the beach and sharing stories about people and events from the past. Evan will be going into his sophomore year at Luther College in the fall, studying history.

Today’s Object Lesson might be one of the most exciting objects so far–at least to photograph. At almost 5 feet wide by 3 feet deep, the only way to fit the entire desk in the camera frame was to turn it on its side. Then one of us stood on either side of the desk and held up a white sheet in order to get a clean background.

If you ask me, the photos of the photo shoot are almost as fun as the final artifact photo! 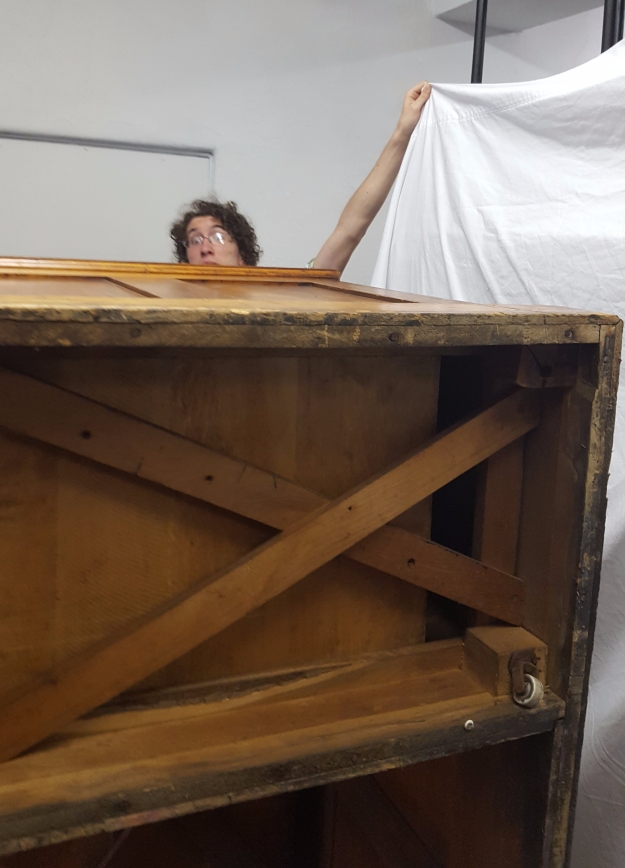 Above: The author demonstrates the many duties of a museum intern! 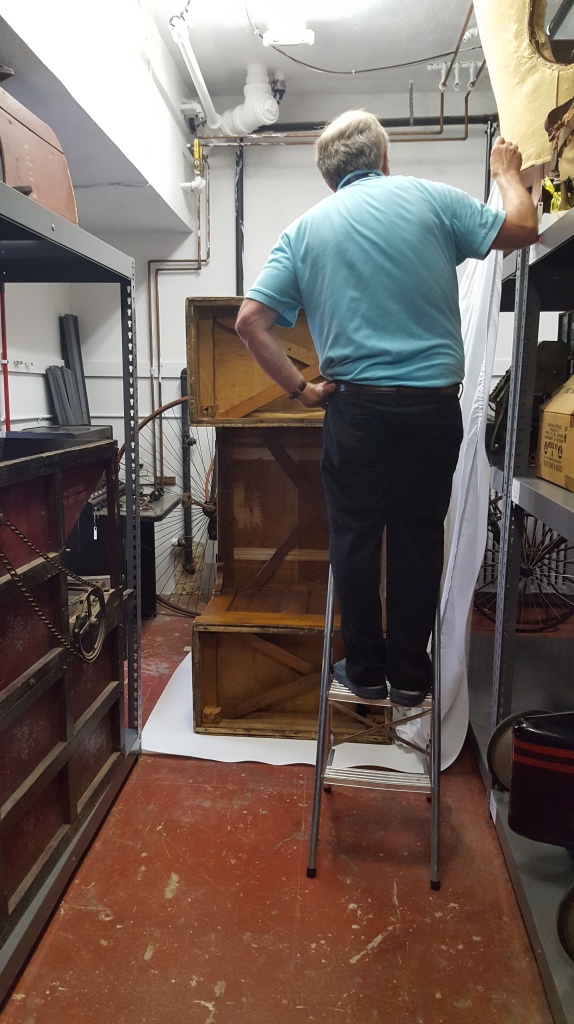 This desk once stood in the office of William Watts Folwell, first president of the University of Minnesota. Born in New York in 1833, he served as an engineer in the Civil War. When he became president of the University, it had eight professors and 100 students, but he was an instrumental figure in expanding the college and making it more useful for all Minnesotans. By the time he stepped down in 1884 the U had about 960 students, and he continued as a professor and librarian for several years.

Folwell raised a few eyebrows by advocating for a full graduate program and the establishment of museums and libraries at the U, rather than only the more traditional undergraduate program focusing on Greek and Latin. He was described as “a knight errant of the new education… interested in everything from Plato to hog cholera.” Students were more familiar in their descriptions, apparently calling him “Uncle Billy”.

Another of Folwell’s accomplishments was his four-volume history of Minnesota, which he wrote over the course of nine years.

The desk itself is made from oak, with some poplar wood. Each of the 10 drawers can be locked, and there are holes on the top of the desk. These may have been used to attach more shelves or possibly other articles, like a lamp or inkwell.

Evan Walker recently completed a summer internship at HHM. He enjoys playing tennis and sharing stories about people and events from the past. Evan will be going into his sophomore year at Luther College in the fall, studying history.

The majority of our operating support comes from the generous support of individuals like you. Like what you see? Please click here to support this project and to preserve local history. Thank you!

This chair was used by Franklin Steele (1813-1880), a founder of Minneapolis and prominent in the lumber industry.

Stylistically, this a bentwood chair with a cane bottom. Manufactured by the Thonet company in Germany, this chair is signed with the original Thonet company mark. Michael Thonet, founder of the Thonet cabinetry company, was one of the most important innovators of bentwood furniture making. He patented a process of gluing layers of wood together through veneer and lamination, and then bending them under heat to created curved back-rails and legs on chairs, headboards, and sofa arms. By 1900, the popular, inexpensive furniture style was widely produced by furniture manufacturers in the United States.

Steele was a founder of Minneapolis who became wealthy through the lumber industry and land deals. Born in Pennsylvania, he heard of prosperity in Minnesota and traveled there via the steamboat Burlington in 1838. He went to Fort Snelling, and at the age of 25, became the storekeeper.

In 1837, both sides of the Mississippi River were controlled by the government and was occupied by 150 squatters. In 1838, Fort Snelling commander Joseph Plympton convinced the government to put the east side of the river up for settlement. Steele staked his claim on the best spot of land by arriving to the site before dawn on the first day of settlement, thus securing his claim over St. Anthony Falls and his prominent role in the Minnesota lumber industry. A dam was built in 1848 blocking the east half of the river, allowing him to catch lumber sent downstream from the north. In 1854, squatters were able to purchase the west side of the river, and thus built a dam on the west side. This dam created, along with Steele’s, created an inverted-V shape which can still be seen today.

Apart from logging, Steele was known for many other building projects in what is now Minneapolis. In 1849 he plotted the town of St. Anthony, which was incorporated with Minneapolis in 1872. In 1852, he built a suspension bridge linking Minneapolis and Nicollet Island. Being an entrepreneur, he charged a toll of 5 cents per pedestrian, 25 cents per wagon, and 2 cents per pig and sheep to cross the bridge. Additionally, in 1851, he donated 4 acres in St. Anthony which was used to build the beginnings of the University of Minnesota.

Through his prominent roles in the lumber industry and land deals, Franklin Steele was undoubtedly an important figure in the emergence of Minneapolis as a prominent city. He helped to build Minneapolis and Hennepin County sitting on this very chair!

To volunteer at HHM, contact James Bacigalupo at history@hennepinhistory.org or 612.870.1329.

In 1959, a 19-year-old University of Minnesota student finally got his first gigs playing his guitar and singing the tunes he wrote himself—and for which he would later win a Nobel Prize for Poetry.

Bob Dylan sat in this simple chair at The Ten O’Clock Scholar coffeehouse during those gigs. Though he was only at the U of M from 1959 to 1961, Dylan and local legend John Koerner played together there, nurturing each other’s love of folk and blues.

The Scholar was located at the corner of Fifth Street and Fourteeth Avenue in Dinkytown, a historic student neighborhood adjacent to the University of Minnesota. The décor at the Scholar was simple: small chairs and tables where people gathered to talk, listen to music, or read. The building was burned to the ground in the late 1960s.

The chair was a gift of the Minnesota Historical Society.